How to Pasteurize Goat Milk in a Sous Vide

Home » How to Pasteurize Goat Milk in a Sous Vide 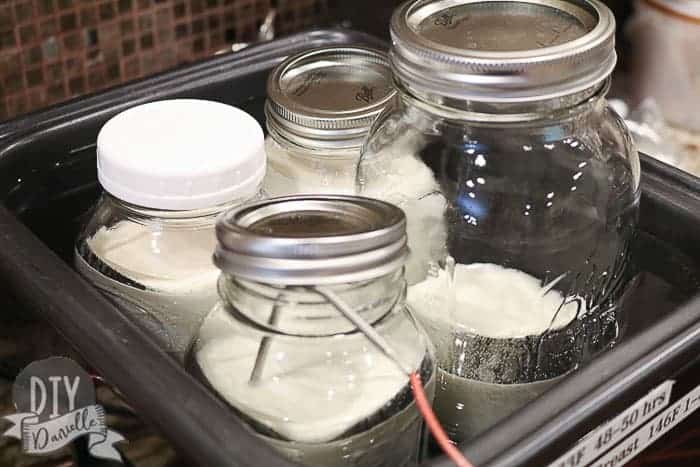 Learn how to pasteurize goat milk in a sous vide using mason jars.

This post contains affiliate links. If you make a purchase using one of these links, I may receive a commission on the sale. I am not a doctor or a health expert. This is how I pasteurize and I cannot guarantee it is 100% safe or accurate. A home pasteurizer may be safer- I am not sure. I just reviewed the guidelines for home pasteurization and followed them using a sous vide. Thank you.

One of the challenges I’ve had with milking goats is learning how to pasteurize. First, bringing up the topic of pasteurization with the milking crowd is like bringing up the topic of vaccines with your moms’ group. People have some STRONG opinions and everyone just wants to bully you into doing what they do. It absolutely baffles me. Just do you. There are a lot of benefits to pasteurization and while many believe that raw milk has benefits that pasteurized does not, I was concerned about missing out on a potential health issue in our goats that could impact the safety of our milk. I also like the idea of increasing the amount of time that the milk stays good.

And also, I worry a lot and sometimes I do things just to ease my mind. If I pasteurize and then everyone starts throwing up one day, I can move past “was my milk bad?” and investigate other causes. As someone who panics that I poisoned my children with my cooking every time someone gets a stomach bug, pasteurization felt like the right choice here. So now I can be anxious about something else. LOL.

When I started looking into pasteurization, I saw that I could buy a machine to home pasteurize but they are fairly pricey. I decided to use what I had at home. I looked into pasteurizing with an instant pot, but didn’t know if I could be reasonably assured that the temperature stayed consistent through the process. Boiling water on the stove is good, but requires sitting and supervising a boiling pot of water. Plus the pot can only hold a couple of mason jars and I hate water boiling over!

I was hoping for something a bit more ‘hands off.’ My friend mentioned that she pasteurizes egg in the sous vide so I decided to try that. Our sous vide machine doesn’t get used NEARLY as much as I’d like so it’s generally available for use.

Sous vide machines heat up water and hold it at a constant temperature to cook food. This seemed like the PERFECT device for this project. One of the things I took into consideration is how I wanted to put the milk into the machine- in a sealed bag or in a mason jar? I looked up if I could use mason jars in a sous vide and apparently people cook their food in them! This is PERFECT because I hate the plastic waste of the sous vide bags and I didn’t really want to seal bags of milk.

One thing mentioned in the article I read on using mason jars in a sous vide is that the jars provide a small level of insulation so it may take longer for the contents to heat up to the right temperature.

Now keep in mind that the sous vide takes much, much longer to heat up than a pot of boiling water… probably because there’s more water in there, at least with my machine. The whole process was pretty time consuming, but fortunately it was pretty hands off. If I’d done it over a stove, I would have been occupied with the process the entire time.

How to Pasteurize Goat Milk in the Sous Vide

The main priority for pasteurization is to make sure the milk is at 145 degrees for exactly 30 minutes. Here’s some information about the temperature for pasteurizing different products and I thought it was interesting because if a product has a lot of fat, you want to pasteurize at a higher temperature.

Start by loading your jars of milk into your sous vide machine, then carefully fill your sous vide with water to the max fill line. Make sure the water is higher than the height of your milk in your jars. If you notice in the photos, I have one HUGE mason jar that could have been filled over the water line, but it is not.

I left my tops to the cans off or loosely on; the pressure might be an issue if you sealed them tightly. I also needed to sneak a thermometer in there. The thermometer I’m using will alert me when the milk gets to be a set temperature (145 F in this case), then allow me to set a 30 minute timer. It’s everything I need. I recommend sticking that thermometer into the jar that you think will warm up the slowest. I was tempted to use it for the bigger jar but I couldn’t quite decide if that one would be slower or quicker to warm up. 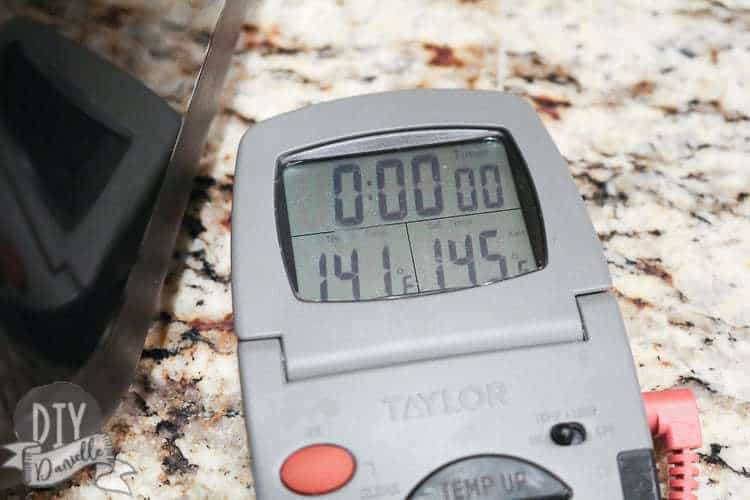 I’m guessing that leaving the tops on loosely may allow the milk to warm up a bit faster. It might be worth keeping a few mason jar tops exclusively for pasteurizing and drilling a small hole in each top that’s just big enough for the thermometer. That might help insulate for heat loss a bit and allow the process to go faster.

Set your sous vide to 150 F. The machine will beep (or mine does) when it reaches the correct temperature. I initially set my machine for 145 but realized that I would need to bump it up so the water stayed above 145 the whole. It took an additional 42 minutes until the milk hit 145 F (but keep in mind that I also had it set to 145 initially).

Once your thermometer notifies you that the milk is at 145, you can start your 30 minute timer.

Once you’ve finished heating the milk, you can transfer the jars using a Jar lifter from the Sous Vide machine into a cool water bath. Your goal is to cool the milk fast WITHOUT cracking your glass jars. As such, you don’t want to use an ice bath. Cold water in the sink or a bowl should suffice. Place your jars in the cold water and let cool. If you stir the milk, it will cool faster.

Keep in mind that your cold water that you’re cooling the jars of milk in will warm up with the transfer of heat out of the jars so you should refill with cold water part way through the process. You can even add ice to speed things up once the jars are cooled down enough so it’s not a huge shock (if you go from super hot to super cold with glass, you’ll shatter the glass- something I talk about in my tutorial about cutting glass wine bottles for crafts).

When it reaches 68 F, cap your mason jars (with sanitized lids) and put in the refrigerator. Make to you label your jars so you know when you pasteurized the milk.

Make sure to check out our wall mounted drying rack that my husband built for our milking supplies! It’s perfect. 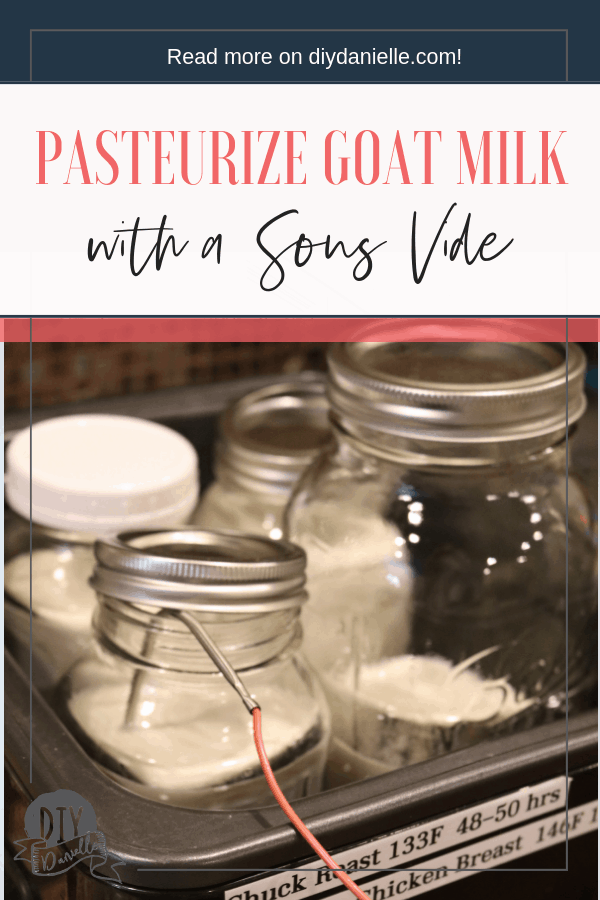 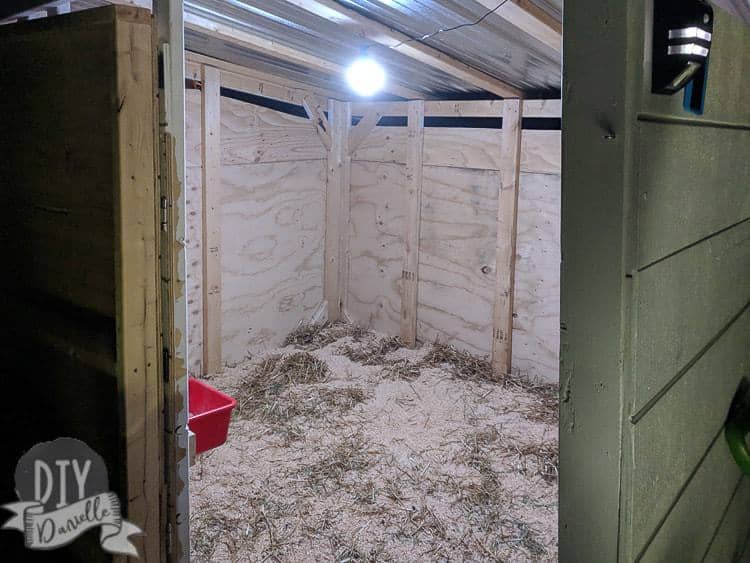 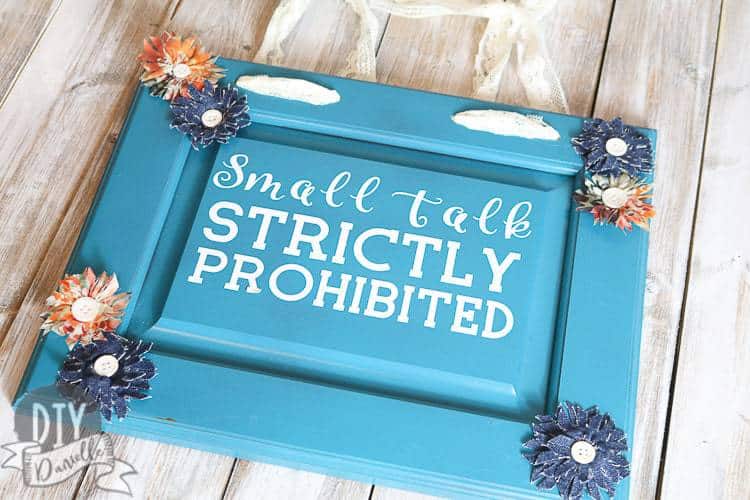