How to Make a Guinea Pig Hay Bag

Home » How to Make a Guinea Pig Hay Bag 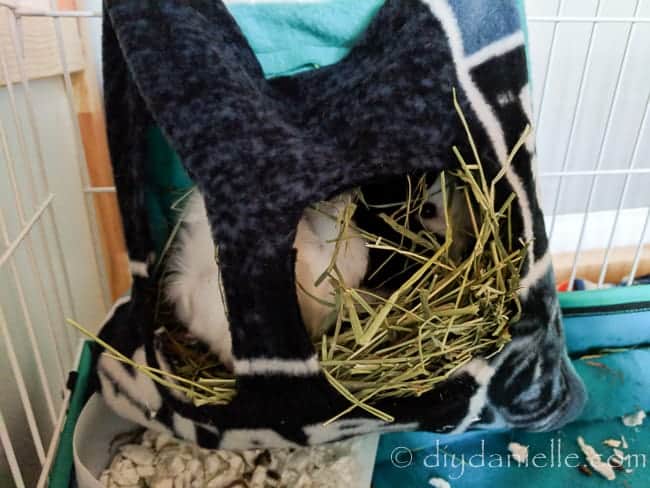 How to make a guinea pig hay bag with nice big openings that allow them to crawl into the bag and hide in their hay. They love it and it’s easy to wash… it’s also less dangerous than metal feeders that they can get their heads stuck in.

When we got our guinea pigs, I got a metal hay rack but I’ve since heard that they aren’t a good idea because guinea pigs can get their heads stuck in them. I decided to try to make a hay bag instead. It’s a great alternative as it holds lots of hay and it’s washable. I like being able to throw it through the wash with our fleece cage liners.

Initially I thought that I’d made the opening in the front too big because the guinea pigs were able to get up into the bag, but this actually ended up being ideal. It hurts their necks to hold their heads up to eat (not a natural position for eating) and being able to crawl into the hay, play it in and eat is much better for them. I love happy mistakes.

New to guinea pigs? Check out my post on Guinea Pig Care and learn all about guinea pigs. I’ll even show you how to clean their cage!

This is slightly off topic, but I wanted to mention the BEST guinea pig hay that I’ve found. I was buying the bags that the pet store sells, but they were really dusty and frequently the hay was in tiny pieces. It was really a mess and my allergies were going nuts. I am not allergic to guinea pigs, but the hay and dust had me coughing and my eyes watering and sneezing… yikes.

I did a little research about the best hay and finally ordered this Small Pet Select 2nd Cutting Perfect Blend Timothy Hay Pet Food off Amazon. I didn’t think there would really be a difference in quality for hay, but there is! I’ve had NO DUST with it at all and all of the pieces are really long. It still gets all over the floor when I’m moving it into the guinea pigs’ hay bag, but it’s easier to pick up because the pieces are bigger and not just hay dust.

The best part is that it’s a lot kinder on my allergies. I don’t need to shower after I do guinea pig cleanup now. Yay!

Anyways it’s available on subscribe and save on Amazon so I added it to my list of regular orders, but I keep needing to skip a month because the box is huge and lasts forever. It’s amazing.

One person suggested getting a bunch of small paper bags and prestuffing them all in the garage. Then you can use the paper bags with the hay in them instead of a feeder. It’s not a bad idea and we know guinea pigs love hay. I like the idea of reducing the mess by doing it that way, but I really didn’t want to waste bags or money. I really prefer reusable stuff, in general.

How to Make a Guinea Pig Hay Bag

You need to start by cutting two 12×12″ pieces of fleece. Use whatever kind of fleece you would like. Prewash the fabric though to remove any chemicals.

You now need to take your front fabric and cut your squares. My finished square size was 3.5″x 3.5″, but I’d start by cutting a 3.5×3.5″ square, then cut the corners each at a diagonal like seen below. Initially I wanted a smaller hole so they COULDN’T get inside the bag, but now I wish I’d made the hole bigger because they love crawling inside and it’s probably better for them than holding their neck up.

Now you can fold the fleece in for each side of the square and sew down with a straight stitch. It’s not absolutely necessary (don’t cut the diagonals if you don’t want to do this) because fleece won’t fray, but it just creates a more finished look. 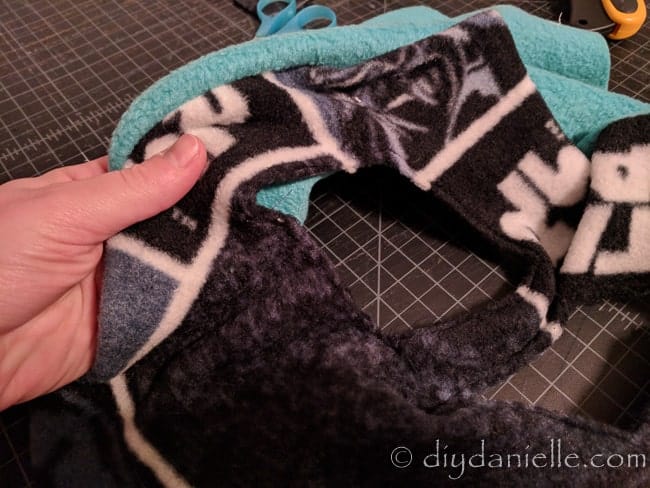 I have a cheap grommet press that I got at the store and I hate it. It does the trick, but I haven’t been impressed. I have been eyeballing the KX8J Handheld Press from Kam Snaps because it does grommets and snaps. Their stuff is pretty high quality from what I’ve seen. I just haven’t invested yet. You can use grommets like I did or just sew on some strips of fabric or other straps to tie the bag to the cage. I kind of like the idea of ties so I might try that for my next one.

I plan to make one or two more of these because I like to wash them… because the guinea pigs get into them, they collect hair and they get peed and pooped in. I usually launder the bag once a week and swap out with one of my other feeders. 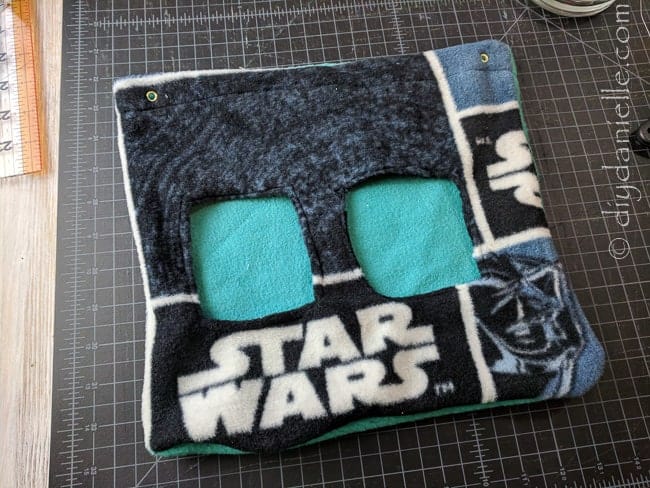 Here it is finished and stuffed with hay. 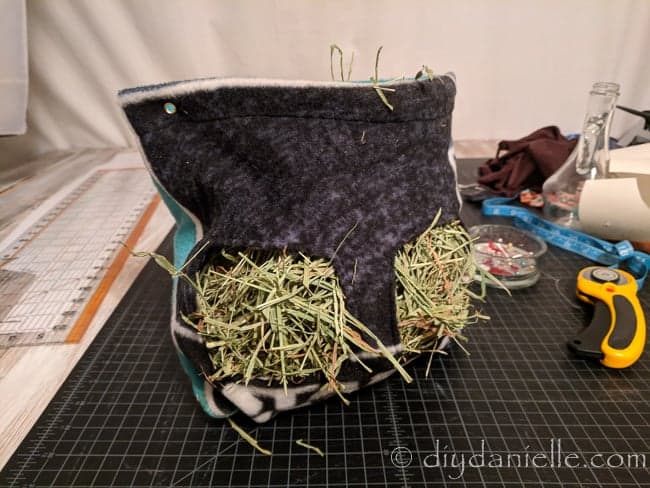 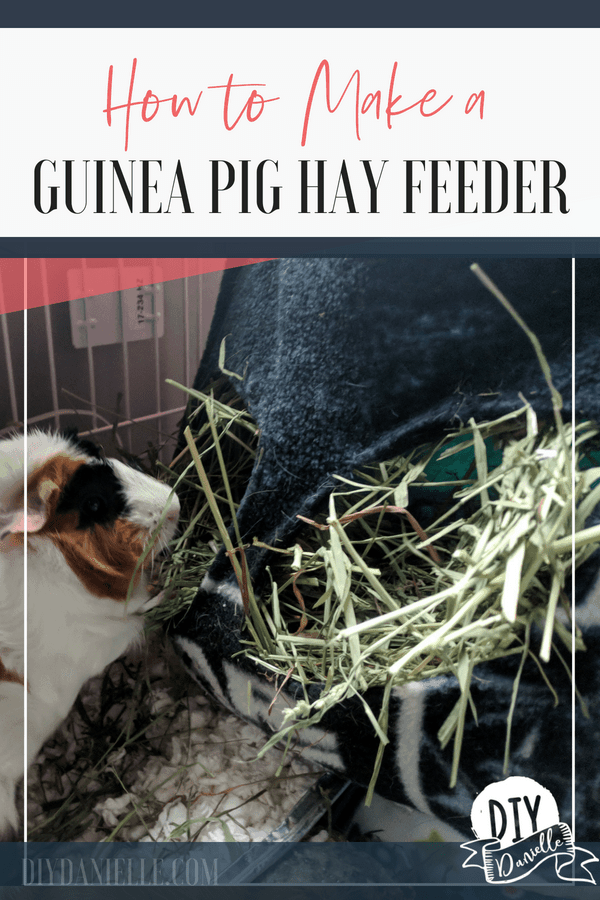 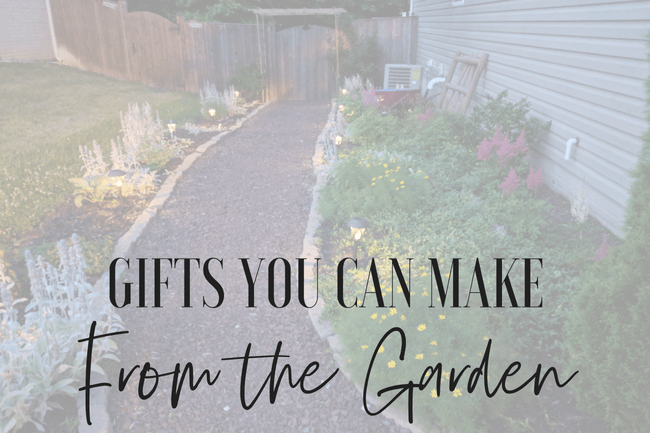 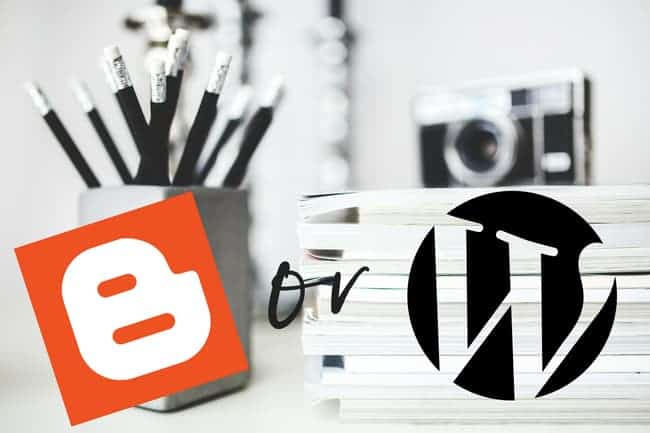 Next
Blogger or Wordpress: Which is Right for Your Blog?
Comments are closed.