Weed barrier options for the garden and other places in your yard. Here are some fabulous and free alternatives to landscape fabric.

Deciding on the right weed barrier is always a challenge when you’re starting a garden. There are quite a few different options: some are free, some are expensive, some are eco-friendly, some are not. I want to share with you some of those options in my experiences with them.

When I first started gardening, I was using landscaping fabric. As it’s the standard thing to use and my mother grew up using it, I didn’t consider any other alternative.

Now I know that tilling is controversial, as many people now believe that it’s harmful to your soil and the soil quality. But one of the downfalls to landscaping fabric is that you can’t till that ground without having your tiller get wrapped up in landscaping fabric.

It’s also very difficult to move your garden once it’s in. You really want to pull up that landscaping fabric which at that point has a lot of soil and mulch on top of it. I suppose you could plant grass there and just ignore it. But we’ve always pulled ours up and it’s not easy. It’s backbreaking work and you can tell when you’re taking it out that it has not broken down at all in the soil.

Personally I am not comfortable with leaving something in the soil that will never ever break down.

I’m not knocking landscaping fabric though. It definitely has its uses. I believe that the best use for landscaping fabric and it is in areas where you might use a weed killer to kill any weeds that come up. For example it would work well under a playground area where are you aren’t planning on planting anything.

It would also be useful under pathways where you’re laying down loose rock. We did this in our front garden path that was made with red rock.

That said, I don’t believe that it has a good place in your vegetable or flower garden.

Pros: Great for under paths and playgrounds as it’s a more permanent solution.

Cons: Can’t till, removing it is hard work, it’s expensive, and when weeds grow in it, their roots grab onto the fabric for dear life.

Don’t use this unless you want to grade the ground under so water runs down. It might work on a hill maybe. Rain water will sit on it otherwise… Hello pond. If you want to make a pond, read my pond and patio post!

We did use this along the exterior foundation of our last house, grading the ground so the water would run away from the house (the top of the hill was closest to the foundation).

Using cardboard is one of my favorite alternatives to landscaping fabric because it takes so much longer to break down, but it will break down in a year or two at the latest.

Cardboard is a great option because it:

The downfall to cardboard is that often those boxes we like to use have tape and that tape is plastic. The tape will not break down in your soil so eventually you’re going to need to pull it up. Alternatively you can just remove it while you’re putting it down and throw it in the garbage.

If you have shiny boxes, I’ve heard that if you soak them in water, the shiny plastic pulls away easily.

Ideally, you really want to look for large boxes that are plain and brown.

Here’s a few ideas for places you can find them.

1. Friends who have recently installed a playground themselves. These play sets from Costco or other companies come in huge brown boxes. They have staples to be removed but overall it’s not a lot of effort.

2. Check with friends, Craigslist, or Freecycle for moving boxes.

3. My favorite option is to go to Costco or another bulk buy store, and ask them for the cardboard that goes between the layers on their pallets. Usually you can walk around the store and grab these yourself, but they might be able to save some for you if you call ahead. I usually fold these up and put them in my cart. They’re nice and thick, but they’re just plain cardboard with no plastic and no staples.

Plus I love that these would have gone to waste otherwise… I felt like I was saving the day, haha.

4. Auto repair shops sometimes have large boxes that you can have. Call ahead.

5. You can also check with appliance stores for boxes.

When you lay your cardboard, make sure to wet it thoroughly and immediately cover with soil and/or mulch. Otherwise the wind may blow it away, even if you hold it down with bricks. Ask me how I know.

Your next option is newspaper or you could use junk mail. You need a few layers of paper for really do a good job choking out the weeds underneath. You’ll want to wet all of your newspaper as you’re putting it down.

I haven’t tried this option because it sounded like a lot more work than using cardboard, but it sits nicer than cardboard as it will hug the ground a little better. This option may also break down faster which isn’t so much of an issue as you might think. Don’t forget that a lot of weeds start from seed which comes from the air so a weed barrier is really just blocking out the weeds underneath it. It’s not necessarily preventing weeds in your garden long-term.

You want your weed barrier to be thick enough that it blocks the light and access to the light for any seeds that have already gone into that ground underneath.

This is the disposable yet recyclable alternative to a fabric drop cloth. The stuff I’ve gotten on the role has been thick. It has the benefit of being thicker than newspaper but not quite as thick as cardboard. Like landscape fabric, it’s easy to roll out. While it costs money, it might be easier for you than breaking down cardboard or newspaper. I think this cost me around $12/roll. I only bought one roll because I’m cheap. Haha. I went back to cardboard.

I don’t think this has been as effective as the cardboard.

I did try some painters paper that was folded up inside a plastic bag. It was super thin and not worth using. It flew in the wind like a kite when I was trying to put it down too. Sigh.

I’ve heard a lot of people swear by old carpet to completely block out any sunlight that comes through and kill the weeds or grass underneath.

Here’s my thoughts on that. Carpet is heavy. I don’t think it’s going to break down in the soil. It presents the same issue for me as landscaping fabric but it’s even heavier to haul out and get in the garden.

I also am not sure I’d have a good place to pick up used carpet or a good vehicle to haul it in. If you have a pickup truck and access to somebody who installs carpeting, this might be a great option for you.

The other concern I’ve had is if anything from carpeting would leech into the soil. I really don’t know enough about carpet to say.

I’m really interested in something called a “track system” for horses and frequently the people who use them want to kill the grass that the horses are on. Carpet makes a really good option for them. But they’re also not going to be placing anything else on top of it. They let the carpet do its job then they pull it up and dispose of it.

And that’s my other issue with carpet. Our landfill charges money to dispose of large items like carpet. So there’s some financial cost to this option.

Blocking Weeds in Your Garden

If you’re looking for ways to prevent weed seeds from taking hold in your garden once you put your weed barrier down, I have had decent luck with Preen.

I’ve heard people say they also use a cornstarch mix that sounds like it does the same job. I haven’t tried it.

Mulch is also a great option if you lay it down thick enough. We’re using wood chips as a mulch, which are often found free, in our garden.

I am working on another post to talk to you about some mulch options for your garden. Keep an eye out for it and subscribe to my newsletter so you don’t miss it!

Interested in gardening? Here are some other posts about gardening that I’ve written and you might enjoy: DIY Concrete Planters | Privacy Planters | How to Use Pine Straw as Mulch | 13 Stunning & Easy Garden Trellis Ideas | How to Setup a Pond and Patio | Gifts to Make from the Garden | Everything You Need to Know about Grow Lights 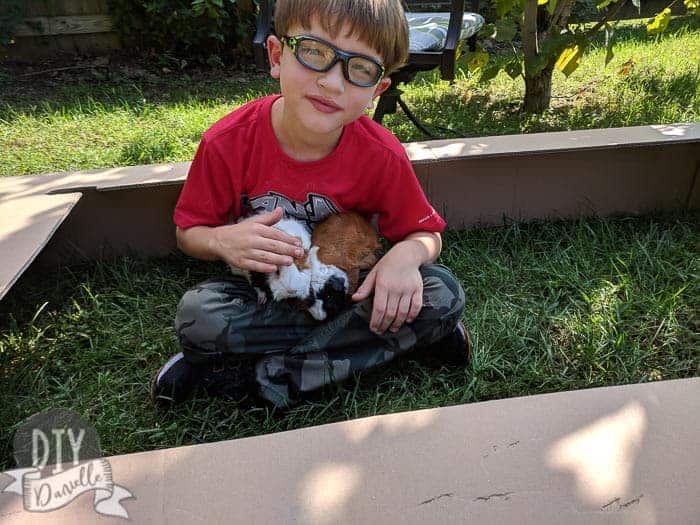 Previous
Can Guinea Pigs Be Kept Outside? 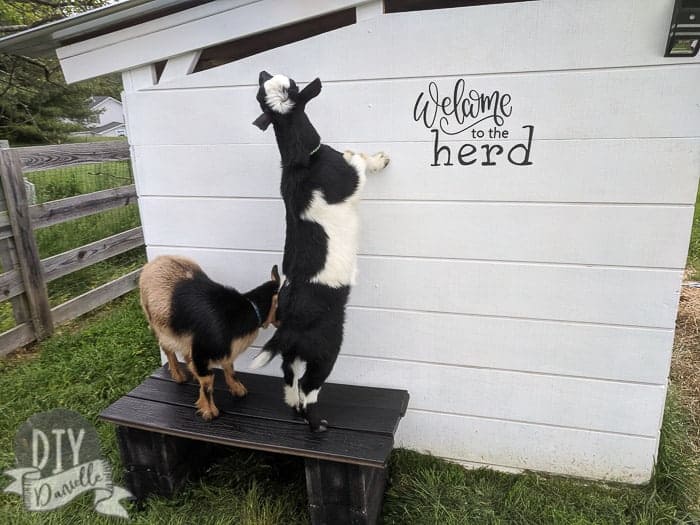