Prefold Diaper Conversion to a PreFitted

Prefolds are the only thing that’s working right now for an overnight diaper that won’t leak if Baby G has a super huge pee. Currently, we are using a prefold with a soaker made from two Alva Baby bamboo soakers sewn together laid inside it. Then we put a waterproof Pul cover over it all. This works like a charm for keeping the bed linens dry, but it’s really difficult to put prefolds on Baby G these days. He’s started to doing some serious gymnastics while we change him. I don’t know how people did this before Snappis- I would totally have cuts all over my hands if we had to use pins! Basically the idea for this project is to turn a prefold diaper into a fitted diaper- which will have elastic for the legs and back to contain messes and there will be NO FOLDING. Folding was fun back in the day when Baby G sat still. We’ll still put a diaper cover over it all, but it’ll be easier to get on and Snappi real quick. I could probably put snaps or hook&loop on as an alternative, but I will stick with Snappis for this to save supplies. I have a HUGE order of Pul coming in and I don’t want to run out of snaps for it all.

For my first attempt, I followed the tutorial from Fairy Fluffmother exactly (I think).

My prefold is a premium size indian prefold from cottonbabies.com. It has been fully prepped (we were using it before as a regular prefold). You NEED to prep your prefold before doing this. The prefold goes through some incredibly crazy changes when you prep it.

I just eyeballed it really which worked for me. I think it’d be nice to just cut them identical by folding the prefold in half and cutting, but it was a lot of layers to cut through already and I don’t think most scissors (not sure about using the rotary cutter) would go through it all. I know my scissors had trouble with just one layer of prefold.

Prefitted with FOE and Pocket

For my second attempt, I wanted to tweak it a little bit so as to accomodate my desire: a good overnight diaper for Baby G.

If you’ve never used a prefold before, they hold a ridiculous amount of urine. I’m not even sure how it happens… It is like a sponge. So folding over the middle is doubling up the absorbency in the “wet zone” (although that mostly in the little girl wet zone if you don’t point “it” down!) and then adding two bamboo inserts is a substantial amount of absorbency for one baby.

My child will doubtless still be soaked by the morning.
Here’s why I anticipate this result. Today I went to change Baby G’s diaper, an AI2 with snap in soaker, unbuttoned the diaper, and I noticed that there were little droplets of urine on top of the soaker. This aggravates me so I need to investigate the problem. Can’t have my diapers malfunctioning. This sounds odd, but it’s a matter of pride and ensuring that my detergent isn’t causing repelling.
I’m pressing on the droplets to see if they will absorb with pressure when suddenly- boys will be boys- a stream of pee hits me. Yeah what kind of moron leans close to investigate a baby boy’s open diaper!?! I had figured that his recently wet diaper indicated he’d already peed, and I’d changed his last diaper just an hour or so prior, but alas he obviously had to pee again. I “caught” the rest of the pee with my ninja mom skills, then proceeded to pull out a clean diaper. Wiped him up and I had just started to scoot the clean diaper under his tush when I narrowly avoided another stream of urine! For realz?! This third pee might have been the longest pee EVER. Austin Powers post being cyrogenically frozen kind of pee. I am, of course standing there trying to catch it with my hand, trying to keep the clean diaper clean (I failed), I am late to meet up with my friend and her baby girl, and yet every time I move my hand away, it starts again! By the end, excluding the amount soaked into the two diapers and the changing pad cover, there is still what appears to be 1/2 cup of pee in a puddle on top of the changing pad cover. Such a small person, so much pee. Of course, getting peed on would disgust me with anyone else’s child, but Baby G is just giggling at me and I can’t help but giggle with him.

So I need this prefitted to be perfect. I also need it to all come apart to some degree because these are a pain to dry if you put too many layers together. AIO diapers tend to be slow to dry for this reason- and that’s one reason I don’t use them. 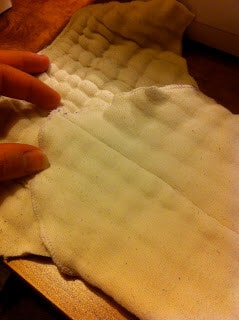 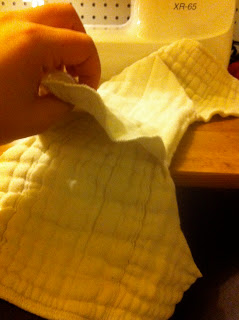 What I decided was that instead of using a zig zag stitch to sew the inside of the prefold down into the middle, I would zig zag it’s edges which left me with an opening in the middle to slide the double layer of bamboo inserts into.

After this, I opted to use FOE (fold over elastic- the green stuff in the picture) to finish the edges of the prefitted where I’d cut- no zig zag stitching the edges! This eliminated me needing to create a casing for my elastic or using a regular elastic. 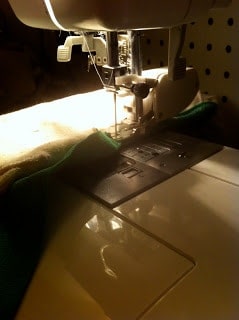 FOE functions as a regular elastic, but it’s attractive and placed on the outside of the diaper. You sew it down with a zig zag stitch for the areas where it doesn’t need “elastic” and then for the leg area where you’d normally sew your casing, you stretch the FOE as much as possible as you sew it down. This is only my third time using FOE and my technique- while improved- still sucks. I try to pull the end that’s already been sewn with one hand, pull the other end with my other, and pray. Despite how complicated the FOE is to get used to, I still found it easier than doing the casing and threading the elastic through layers of prefold like I did with my first prefitted attempt. What’s nice about using FOE for the first time with these prefitteds is that it will go under a diaper cover so if the elastic isn’t perfect, no worries because the cover leg elastic should “catch” anything that escapes. I am hoping if I make a few prefitteds like this, that perhaps my skills with FOE will improve. 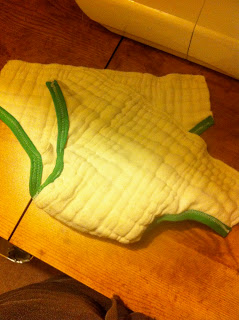 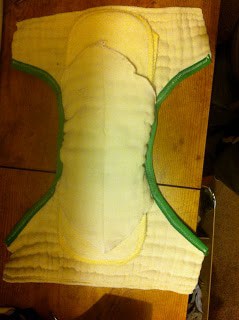 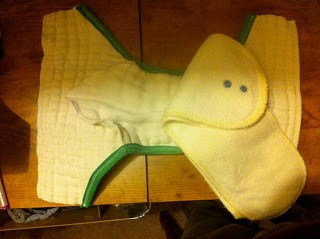 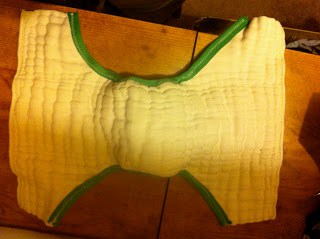 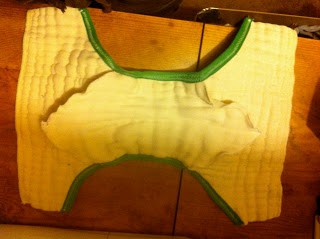 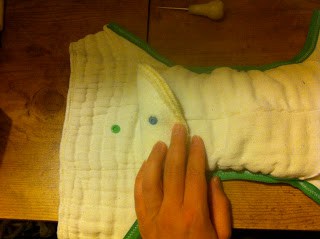 To complete this, I added a snap on the back of the prefitted to hold my bamboo inserts in place. I bought a bunch of bamboo inserts off a coop, used a straight stitch to sew two together, put a snap on them, and now I use them for my pockets and AI2s. Now I can use them in my prefitteds as well for overnight.

For washing, I can just throw it in the wash and unsnap the insert. I probably don’t have to pull the insert out for the wash because the washer will likely do that itself, but if it’s still tucked into the pocket when it transitions to the dryer it’s important to take it out so it will dry faster!

Here is the final product 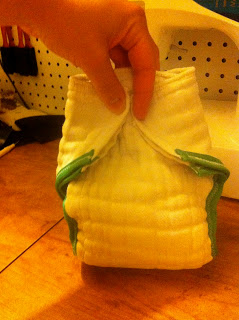 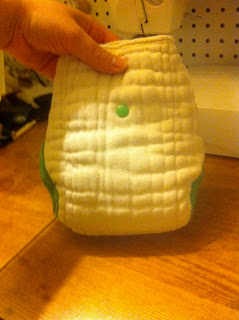