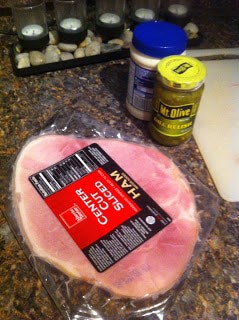 We had this amazing little sandwich shop next to my high school where we’d walk for lunch once we got passes to leave campus. My favorite item on the menu was ham salad… I’d have it on a sub roll or a bagel, toasted, with a slice of cheese on top. Yum. Ever since I moved away from my home town, I’ve been trying to replicate the ham salad because I could never find it when I lived in Texas and I don’t believe I’ve seen it in Maryland either.

Now just note, this food does NOT look cute… it’s chopped up ham. I’m not sure why some people find this more disgusting than chopped up chicken in chicken salad, but some people do.  Pureed meat is just disgusting looking either way. It does taste GREAT though, if you like ham.

You’ll need a food processor to make it. The food processor is one of my favorite kitchen appliances. It might be the fact that I’m notoriously dangerous with anything with a sharp blade, but with the food processor the blade goes inside while active where it can’t get my fingers. Safe. Haha. I just have to be careful cleaning it and getting it setup.

I made all of Baby G’s purees with this and I made them quickly. It does a great job of chopping up meat into puree.

This is similar to the one that I have:

I bought some ham that I saw on sale. Usually I get precooked ham so I can immediately have and eat the cold ham salad. Unfortunately, I didn’t pay attention and didn’t realize that this wasn’t precooked until AFTER I pureed everything. Oops. As a result, I put the pureed ham salad into a casserole dish and cooked it at 350*F for 20 minutes, until it was cooked thoroughly (using the meat thermometer and the instructions for food temperature off the package of ham). I recommend using precooked ham because I like the ham salad cold better than I like it warm- and I usually don’t wait to eat it! Also, you can’t taste test as you go to make sure you added the correct amounts if you don’t use precooked ham (or cooked ham)… do not taste the raw meat (ew).
Ingredients: 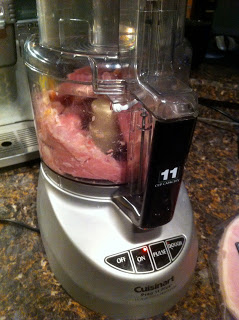 Cut up the ham into smaller chunks so the food processor can have an easier time with it, throw it in with the Miracle Whip and the dill relish. I usually add Miracle Whip and Dill Relish until I like the taste best. The quantities above are what seemed to be good to me as I made it, but I used heaping tablespoons.

I just let the food processor do its job here, usually it goes pretty quick. I turn it “on” and just keep an eye on it until the ham is all pretty much pureed.

Sometimes I’ll cut up some green olives to add to the ham salad as well.

I put it on a bun, put a slice of cheese on top, and enjoy. You can also put it on a lightly toasted bagel or a sub roll. 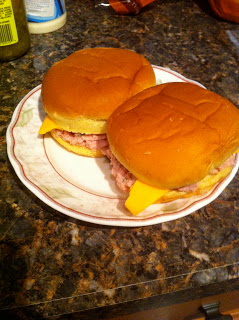 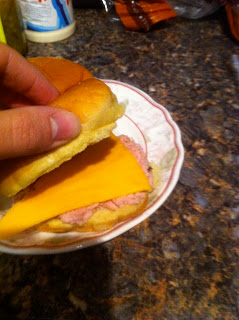