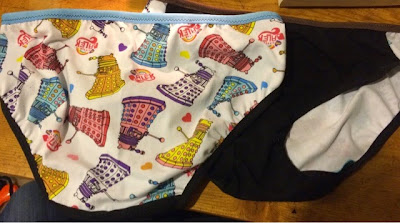 I received a small cut of “My Little Dalek” fabric from the Knits and Giggles fabric co-op that I participate in as a birthday gift which was super awesome. I was trying to figure out what to do with it because it’s a bit girly for the boys to have and I wanted something for me.

I settled on underwear. This ended up being such a satisfying project, considering it’s a boring everyday item. I’m really excited to have “custom” underwear. I usually buy big packs of cheap underwear because I’ve found they’re more comfortable than some expensive name brand kinds, but they always have crappy fabric and elastic… the elastic has strings coming out of it, the fabric breaks down easily, etc. Bleh. But they’re comfortable! So making better quality underwear with the same pattern was appealing. It doesn’t take much fabric and it’s not complicated.

To create a pattern, I took a pair of a pair that needed to be trashed… I cut it apart where it was sewn together. Then I folded it in half and traced around it to create a pattern. Because the FOE (fold over elastic) will go around the top and along the legs, I didn’t need an extra seam allowance there. I will be sewing exactly where I had to cut (to take the panties apart) so theoretically you should add a seam allowance there. I think knit and FOE both stretch so nicely that it is not absolutely necessary.

I always make sure to mark on my pattern what the pattern is, where the fold should be, and the size. 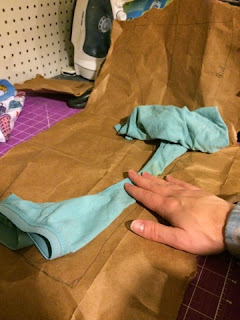 I didn’t have enough of my scrap piece of knit to make the entire long piece of underwear so I also used some black knit that I had leftover from another project. I used my designer fabric for the back of my underwear and the black for the front and for the liner.
To get my pieces cut just right, I cut out as big a piece as I could of my “butt fabric” (you can see it in the picture below if you look close). Then I overlapped it slightly with the black knit which was laid out on my cutting mat. And cut your black piece. 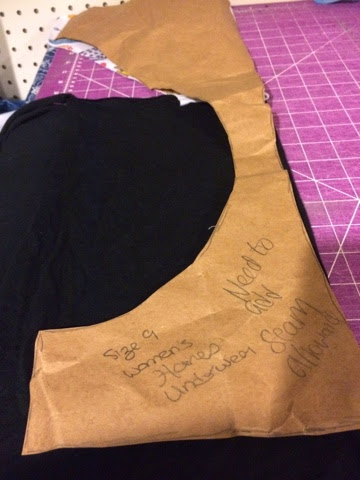 Then I just pieced the black and Dalek fabrics together by facing them right sides together, sewing across (I used my serger, but you can use a regular machine), and then I checked to make sure they were correct against my pattern.

You want a small cut of fabric for the inside liner… I used the black because it seemed like a smarter plan than using white fabric for a liner. Once I cut that, I sewed it on the big cut of fabric with a zig zag stitch.

I folded the fabric over on each other so it’s right sides are together, matching up the sides of the underwear- sew each side together. I serged but knit doesn’t fray so it’s not necessary. Now you should have something that looks exactly like underwear- all you need to do is add elastic.

For elastic I used FOE or fold over elastic. Specifically: Black Fold Over Elastic Matte FOE 3/4 Inch from Diaper Sewing Supplies (DSS). I am not affiliated with DSS, but I purchase a lot of supplies for diapers from them and I think they sell good stuff. I also find their prices reasonable which is what keeps me coming back.

If you haven’t sewn with FOE before, it does take some getting used to and you might want to check out a YouTube video on it. I struggled for a while, but seem to finally be getting the hang of it. I still can’t make it look perfect, but it’s no big deal. It works and that’s what matters.

For FOE you just fold the FOE around the area you’re trying to add elastic to… and you gently stretch the FOE (not the fabric) as you sew it on using a zig zag. For underwear, you’re doing the waist band and the legs. The FOE folds in half and you sandwich the underwear’s waistband (or leg area) between it. GENTLY pull the FOE *only* as you sew it onto the underwear using a zig zag stitch. You want the zig zag to go slightly over the FOE onto your underwear. If you don’t do this, the FOE flips up a bit.

These are the front of two pairs that I made. 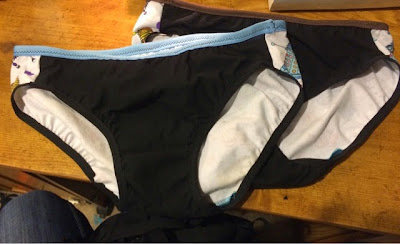 This is a great project for upcycling knit shirts like t-shirts too! You could dye old t-shirts and make a lot of underwear from a few shirts and it’s not a super long process once you get the hang of it. You do want to make sure you have enough FOE as it runs out quickly. I never order enough.

Disclosure of Material Connection: I have not received any compensation for writing this post. I have no material connection to the brands, products, or services that I have mentioned. I am disclosing this in accordance with the Federal Trade Commission’s 16 CFR, Part 255: “Guides Concerning the Use of Endorsements and Testimonials in Advertising.”